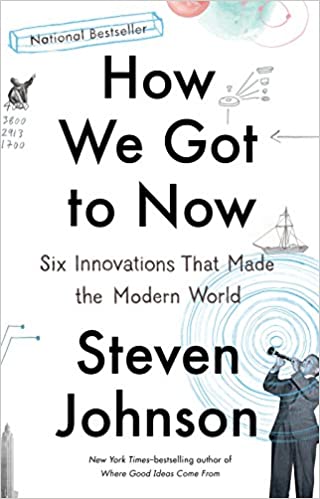 This is an exceptional interdisciplinary book encompassing history, science and story telling to review six inventions that changed the world that we live in. Something interesting is that these inventions are not the things that one would guess if someone asked you beforehand. These inventions are: glass, cold, sound, clean, time and light.

Glass enabled things like spectacles, telescopes and microscopes, enabling humans to understand the world around them, from the invisible world of cells and microbes all the way back to the early days of the universe.

The ability to make things cold has enabled humans to reshape migration alongside being able to eat balanced meats thanks to freezing foods to postpone them for later consumption. Cold also enabled global trade and demonstrated the vast fortunes that can be made by transporting a commodity that is ubiquitous in one environment to a place where it’s scarce.

Sound has changed how to we communicate, gather, protest or are entertained. The first break-through in our obsession with the human voice arrived with the non-intuitive thought of writing voice down. This is how the phonograph was invented. This enabled communication across distant areas of the world, alongside with the appearance of monopolies like that of the AT&T network.

Cleanliness has arguably been the most impactful invention of all time, especially as it relates to life expectancy and child mortality rates. In the Middle Ages, for example, submerging the body in water was distinctly unhealthy, even a dangerous thing. Advances in public infrastructure enabled access to running water and in the 1900s John L. Neal’s experiment to start adding chlorine to Jersey City water reservoirs led to a 43% reduction in total mortality in the average American city. Combined with the progress on microscopes and the understanding of germ theory, this led to the appearance of the soap and cleaning product businesses which helped reinvent the advertising industry to what it looks like today.

Time has always existed but it was never measured accurately. Before worldwide atomic clocks each place had it’s own proprietary way of measuring time. Accurate clocks greatly reduced the risks of global shipping networks and the whole idea of an “hourly” wage enabled the resolution of the industrial age. Watches went from being a luxury product in 1850, selling at $40 to becoming a mass market product in 1878, costing circa $3.50. GPS also enabled location tracking by comparing clocks; each new advance in timekeeping enabled a corresponding advance in our master of geography.

Finally, light reshaped human’s lifestyle. From extracting spermaceti from sperm whales’ brain to produce burning oils humans went all the way down to invent electricity, the lightbulb and even a time travel machine by observing light emissions from distant stars. Edison’s invention of the lightbulb is particularly interesting as it comes to show that 1) being the first to market isn’t as important as dominating it; 2) American electronic companies depend on their imports from Asia since many years ago and 3) even though we generally conceive ideas as being those “lightbulb” epiphanies, inventions just like in the case of the lightbulb itself tend to come together over decades, in pieces.

You can find other reviews from books I read here.