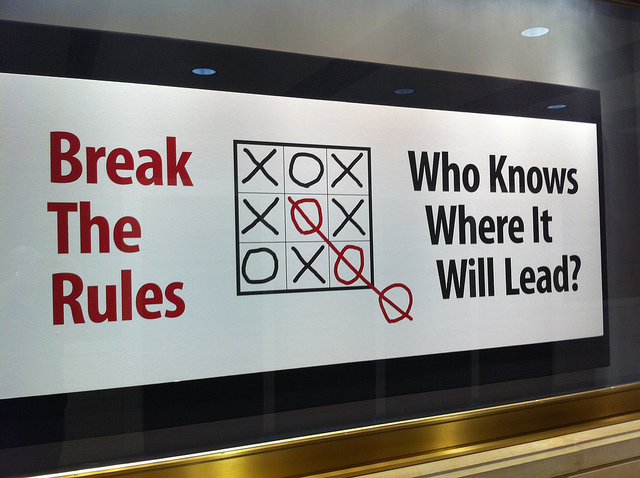 Living by Your Own Rules, the Key to Success

Yesterday I came across this post about “How to become the Best in the World at What you Do“, which I found totally spot on.

One of the main statements on the article is how living by your own rules is the key to standing out from the crowd. What is more, if something is already popular is certainly the wrong thing to be doing. Most people is mediocre because they’re playing by rules that halt optimal performance; they climb using traditional ladders which are intended to slow them down in the first place.

“When everyone is zigging, that when you zag“, or as Darren Hardy says: “you should run toward the thing everyone else is running from” in order to stand out from the crowd.

As Peter Diamandis points out, “The day before something is a breakthrough, it’s a crazy idea“. Really, if what you’re doing doesn’t look crazy enough to you, and very crazy to everyone else, you’re probably following the wrong path.

Instead of following rules, create your own ones. Learn to play your own game and automate your success. On top of that, learning to build a lifestyle around being true to yourself is what will make you happy along the way. If you’re true to yourself, good things will follow.